Some will be aware that I live in Twickenham.  Some won’t, most probably don’t care and there may be one or two thinking “Great, now I know where the Little Project is, I can wait for it to be finished and then go and nick it”.  I say to you crooks, you will be waiting an awful long time and it will be a challenge.  Little Project is guarded by some of London’s famous urban foxes.    The local foxes have a passion for grazing on fresh strawberries and are have a kinky habit of eating horse poo.  It is obvious that they’ve never been to the countryside because they’d know that every horse living outside the conurbations has been involved in fox hunting.  The horse poo that the local foxes eat comes from Metropolitan Police horses who prefer to patrol sports venues with a haughty horsy look on their face.

This doesn’t have a lot to do with getting a motor cycle on the road other than we – locals – like to fleece the incoming rugby community in any way possible and make a few bob from them.   There are a variety of stalls in gardens selling burgers (possibly horse burgers, allowing that fox hunting is now banned and so countryside horses are all being sent to the knackers yard), selling ref-link so you can hear the referee telling the players to behave (probably with a Welsh accent today so it may be difficult to understand) and pocketing tenners for allowing car parking outside your house.  It all helps fund our lavish lifestyles and pays for whimsical hobbies.

It is also snowing off and on, so I may plod down to the stadium and try selling cups of weakened Bovril to chilled Frenchies.   Regardless, it is too cold to spend more than 20 minutes in the (unheated) shed today.  In those 20 minutes I have had some success.  You may remember the rounded bolt.  I decided to cut a groove in it and turn it into a screw.

Needless to say, this was pointless as although the screwdriver didn’t break anything, it still wouldn’t turn.  So, I thought I would cut off the sides and turn it into a not-rounded-off-bolt.

And this worked just fine.   With a trusty adjustable spanner it turned as easily as a polititian realising that the stance they’ve taken on wife beating isn’t going to look good in the Sunday papers.  We are left with… 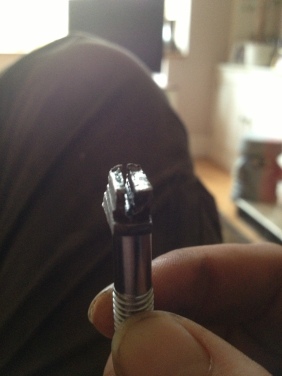 So all in all a brief but satisfying sortie into the land of Little Project. Finally, I am wondering where Seat is.  Allowing that it is going to take eight weeks to get here (that is 56 days to go halfway around the world, I should have sent Phileas Fogg) and it is 6 days into its journey and allowing that in my imagined trip it is being carried by a hitch-hiker, it is probably in Sumatra about now.  How exciting!

One thought on “Odd shaped balls”

How sad can a bike be?